Update 6/21/2013: The Washington Times has posted a corrective note at the beginning of the article about the error and removed the image. Thank you, editor. 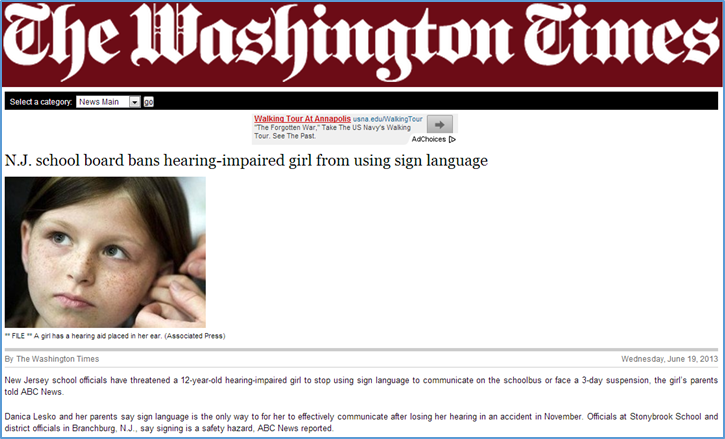 Only problem is, as I’ve discussed in my Cause for Madness: A Cautionary Tale about hitting “Share” post, you need to fact check things before you run with them.

If you spend even a sliver of time looking online, you’d come across this LIST-SERV archive that contains an article from The Star-Ledger from 4/18/2001. Note: The ABC News article the Washington Times used as a “source” from “April 18” has no year on the article (criminally bad site design, ABC).

A little more searching, also on ABC, you’ll find that April 26, the ban was lifted.

The file photo is wildly inappropriate.

Sure, an adorable girl getting a hearing aid is marginally related to this story, I suppose. Only problem is this photo is of Zahra Baker, a 10 year old girl who was brutally and gruesomely murdered in 2010.

What’s bothering me about this is two-fold. The Washington Times has not adjusted/removed the article, nor issued a retraction. Additionally, it’s already running around FB/Twitter, so any retraction has to be noisy to even cut through the chaff any more. My hope is that this blog post lands high in the SEO rankings so that people find out what a debacle this is and get the facts straight. As the wonderful XKCD put it, someone is wrong on the internet – only people assume it’s a credible source. Evidently not.